Being able to taking a screen capture and effectively and clearly annotate it are essential skills in both my prior job as a software tester and my current job as a programming writer. I work in the software industry and it’s extremely common for me to have to visually explain how to perform a task or where something is. When I started in software testing, over a decade ago, the only real option was to use Print Screen to capture a screenshot to the clipboard, then paste it into Paint and annotate whatever I needed to there. It was tedious, very annoying and often time consuming but for years was good enough. Most screen captures I did as a tester were destined to either be pasted into a test plan or into a bug report to document a defect, so they didn’t have to be all that clean nor consistent, as long as you got the message across.

A few of the testers would pull the screenshot into Photoshop or another heavy-duty graphics program and work on it there. I wanted something lightweight and, to be honest, less expensive.

Then about four or five years ago, my husband (also a tester) demonstrated a tool to me that a co-worker of his had shown him. Snagit by TechSmith. Here was a tool that wasn’t expensive and which could do exactly what I wanted without pain or fuss. I was hooked and have used it from then on. Now that I am working as a technical writer, I still use it constantly.

I just installed the latest version of Snagit on my Windows machine and wanted to walk through with a quick overview of its features. I’ll also point out that TechSmith offers a 30-day free trial so you can try Snagit for free. You may be hooked by then, though.

Installation is very simple via an installation wizard. By default, on a Windows system, Snagit binds to the Print Screen key but you can change that option if you wish. I find the Snagit UI to be easy to understand and user-friendly. (Note that because Snagit is designed to “get out of the way” when you are doing screen captures, I did have to cheat and take the screenshot of the basic Snagit UI and the Snagit Editor UI with Windows 7’s snipping tool, then pulled that into the Snagit editor to trim it down and annotate it.)

Here I’ve used the basic tools to annotate the screenshot. This literally took me two minutes to do, at the most.

The annotation previously shown was done in Snagit’s Editor which also has a simple UI.

I won’t go over every feature offered by Snagit since you can read about those on the TechSmith website but I did want to mention my favorites (in addition to the ease of annotation) with a few quick examples of some of them.

You can minimize Snagit and will end up with just button in the Hidden Icons area of your taskbar. This gives me the chance to show off timed captures; another thing Snagit is great at. One of the banes of my existence as a tester was trying to capture tooltips, flyouts, and other actions that are cursor-based. This is typically not an easy task but it took me only setting the timed capture delay time to 3 seconds, popping open the hidden icon area and then selecting it for capture when the timer went off. 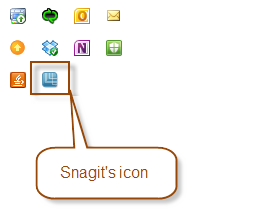 I remember struggling to either minimize a window enough to get it all on the screen at the same time or sometimes having to take multiple screen captures and try to paste them together in order to get the entire contents of a window. Snagit will do automatic scrolling window content captures with one press of the capture button.

I use this to show the area in detail without removing it fully from its background.

I find this feature very useful for blurring out confidential client information.

Torn Edges and Torn Out Sections

These are useful to show that more of what you have captured exists.

You can get or make stamps for your images and I find these really useful for things like telling people where to click or indicating problem areas. A small set of stamps is included with Snagit and I believe others are available separately.

Snagit can do a nice amount of video capture, including with audio if you choose. This is great for tours, etc.

I consider Snagit to be a must have in my toolbox. At $49.95 for a single license, it’s well worth the small amount of money. See the TechSmith website for tours and more in-depth information on Snagit and it’s video capture cousin, Camtasia.

Disclosure: This review is based on software I purchased and own personally. I received no compensation or guidance on this review and it’s purely my own opinion as a long-time user and fan.